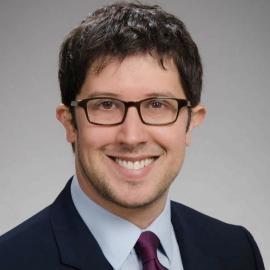 The goal of my research and clinical work is to maximize the communication potential of children with hearing loss. My philosophy is to provide individualized treatment aimed to help each child realize their language potential and to maximize their medical well-being. Whether performing cochlear implant surgery, identifying the medical cause of hearing loss, or conducting infant hearing research, I am truly privileged to be able to impact the lives of my patients and their families.

David L. Horn, MD, joined the University of Washington faculty in 2010. He is currently associate professor in the Department of Otolaryngology - Head and Neck Surgery as well as adjunct assistant professor in the Department of Speech and Hearing Sciences. He earned his medical degree at the Medical College of Wisconsin and then completed an otolaryngology residency at Indiana University. His pediatric otolaryngology fellowship training was subsequently completed at the University of Pittsburgh. Dr. Horn is the medical co-director of the Pediatric Cochlear Implant program at Seattle Children’s Hospital and sees patients with hearing loss, ear disorders, balance issues, and other general pediatric otolaryngological problems. Dr. Horn also conducts research as the principal investigator of the Prosthetic Auditory Development Laboratory at the Virginia Merrill Bloedel Hearing Research Center. His work, funded by the National Institutes of Health, seeks to understand how early hearing abilities in infancy are related to later spoken-language development. Originally from Los Angeles, Dr. Horn is thrilled to be back on the west coast. His lovely wife and three tempestuous daughters keep him busy enough when away from the hospital and the lab. When he has a free moment, he spends his time cycling, cooking, watching old movies, and playing guitar.