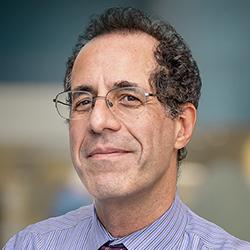 Otology & neurotology have made enormous strides in recent years. We are now able to not just rehabilitate lost hearing and balance function, but in many cases to enhance function that has only partly deteriorated. This increases the complexity of decision making and hence the physician and surgeon's educational role in patient care. Partnering with patients in this process is what makes this field rewarding.

Dr. Rubinstein received ScB/ScM degrees in engineering at Brown University in 1981/83. He received an MD and PhD in bioengineering at the University of Washington in 1988. He completed postdoctoral research training and residency in otolaryngology in 1994 at the Massachusetts Eye and Ear Infirmary. He completed a neurotology fellowship at the University of Iowa in 1995, staying as assistant then associate professor of otolaryngology and bioengineering. In 2004 he was the Boerhaave Professor at Leiden University, the Netherlands. He is currently Virginia Merrill Bloedel Professor of Otolaryngology and Bioengineering and Director, Bloedel Hearing Research Center, University of Washington. He is past-president of the American Auditory Society and president of the Association for Research in Otolaryngology. He is a member of the Collegium Otorhinolaryngologicum as well as a senior member of the Institute for Electrical and Electronics Engineers.

Dr. Rubinstein has published over 110 peer-reviewed articles in both clinical and basic science journals and has mentored 18 predoctoral and postdoctoral trainees in basic and translational research, as well as providing clinical training to a large number of otolaryngology residents and fellows. His laboratory studies models of, signal processing in, and perception with cochlear implants and is collaborating in the development of a vestibular implant. His clinical interests encompass management of tumors of the lateral skull base, as well as auditory, vestibular, and facial nerve disorders.

Dr. Rubinstein's clinical interests encompass management of tumors of the lateral skull base, as well as auditory, vestibular, and facial nerve discorders. He has special expertise in middle fossa approaches to the temporal bone and hearing preservation in cochlear implant surgery.

Dr. Rubinstein's laboratory studies models of, signal processing in, and perception with cochlear implants and is collaborating in the development of a vestibular implant. He is also the administrative director of the Virginia Merrill Bloedel Hearing Research Center at UW.